As I’m sure you are aware, Pickleball is growing in popularity. To meet this demand the tennis and basketball courts at the Walter Reed Community Center have become a major site for constant pickleball. Neighbors in close proximity to the park have raised a number of issues that need to be addressed:

It appears there was no or little outreach to the community. With our increased population growth, the issue of noise will become a major concern to our neighborhoods.

Columbia Heights Civic Association recommends that the courts are closed at the same time as the facilities managing the courts. This will ensure County staff will be there during playtime to minimize any conflict.

– Planning for the up Coming Annual Meeting, plus outreach 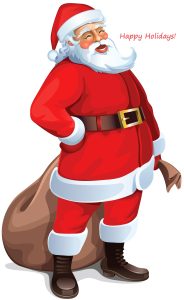 I am extremely pleased to report that Santa enjoyed his ride with Fire Station #9 in Douglas Park so much last year, that he is ready to do it again next weekend. Starting at 12 PM on Saturday, 12/17, Santa will ride through Green Valley, Columbia Heights, and Douglas Park just to remind all the good girls and boys that he’ll be swinging by later in the month for “business reasons”.

The route has been shortened a bit due to time constraints, but hopefully, everyone is still within a few blocks to see him:

Please let this message as a gentle reminder that we are trying to spread joy across a broad swath of South Arlington, so hopefully, the minor route changes are okay. More updates to follow this week as well as a possible Santa tracker, and his plans will get more defined in the next few days. He says he’s been dealing with a lot of reindeer “sniffles” lately (haven’t we all?), so hopefully, we all get to share a fun day on Saturday.